Perhaps the favorite application of music theory in piano instruction is the teaching of  I, IV, and V7 chords – that familiar cluster surrounding the root-position I chord. Primary chords are a guiding concept for Level 4 (Spanish Edition) and the corresponding Student Choice books.

The I‑IV-V7 chord formula is favored for good reason:

The earlier levels of Piano Adventures® work with a two-note V7 chord that lies readily under the hand. This allows for easy and rapid switching between I and V7 chords.

Using the three-note V7 chords at early levels can sabotage the student’s rhythm because of the difficult shift of finger five down a half step. The two-note V7 chord allows the student to maintain rhythmic fluency and the musicality of a flowing meter.

Let’s move beyond our students merely reading the notes of a chord and teach toward the goal of understanding the role of chord sin accompanying a melody. So, immediately after presenting the three-note V7, the piece Cucú, cucú offers an engaging melody accompanied with soft I and V7 blocked chords. How useful to find that the entire piece is composed of only two chords! The Discovery question asks teacher and student to sing the melody and accompany the tune playing only the LH of the piece. Or, sing and play the chords hands together. Play softly and close to the keys.

I, IV, and V7 Chord Symbols

It is ideal to begin using chord symbols as soon as primary chords are learned. For each key, short exercises are given called Reading Chord Symbols. Students may play the chord symbols in a variety of ways – as blocked chords, or a LH waltz bass, or how about a broken chord patterns? Ask students to create their own rhythm pattern on each chord in  3⁄4 or 4/4 time.

Time spent “playing around” with chord progressions is time well spent. Notice the adventurous theory pages offer pieces to harmonize with I, IV, and V7 chords. Write in the chord symbols and voila! Play a LH accompaniment – with no notes on the bass staff!

A Return to the IV Chord

Freight Train Rumble offers a hip, barrelhouse sound that reinforces the 6th and hints to an alternating I‑IV-I-IV pattern. Consider revisiting this piece after the IV chord is learned and plugs in the missing chord tones to the LH pattern. For an easier variation, repeat each chord before changing harmony. See the examples below. 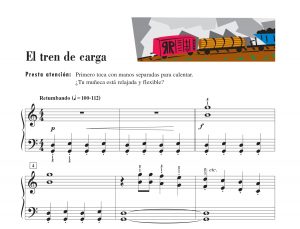 We have all heard plenty of thumping thumbs in LH accompaniments. Yes, the left-hand accompaniments can use repetitive practice, but they also require the right technique. That’s where the Technique & Performance Books shine. For example, the third technique secret at Level 4 specifically addresses a light thumb to remedy – or better yet – to prevent the thumping thumb all together!

Level 4 is designed to achieve beauty and efficiency by playing several notes within a single gesture. The “down and up” touches are applied specifically to left-hand accompaniments for an expressive result.

Often students recognize chords on the staff when they see the notes stacked in thirds. We might call this the “snowman” chord syndrome. Encourage students to tip the chord over so that the harmony is recognized in two important ways: a) when it flows horizontally across the measure(s), and b) as the notes span vertically over both treble and bass clefs.

The first step in this awareness of chords is the simple broken chord followed by the cross-hand arpeggio introduced in Level 4. This pianistic gesture distributes chord tones over several measures and between clefs. This skill continues to be sharpened in higher levels with one and two-octave arpeggios. 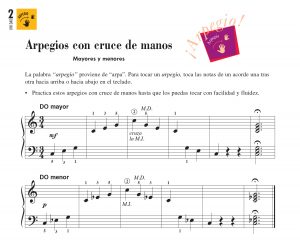 Two words which sum up the terrific progress at the piano – scales and chords. Level 4 invites us into “what it takes” to launch into higher level playing and enjoyment of the instrument.