There is much to share with our beginning students. With limited lesson time, how do we maximize our results? Fortunately, Level 1 presents three elements of pedagogy that have exponential value when taught in combination:

While each element has a unique function, the three concepts reinforce each other in synergistic fashion when the teacher conscientiously integrates them.

One of the hallmark features of Piano Adventures® is the introduction of new notes using varied fingerings. This allows us to teach a specified set of notes without a fixed, preset hand position. Middle DO March, for example, introduces Middle DO as played by fingers 1, 2, then 3. Consequently, the student does not equate Middle DO with finger 1. 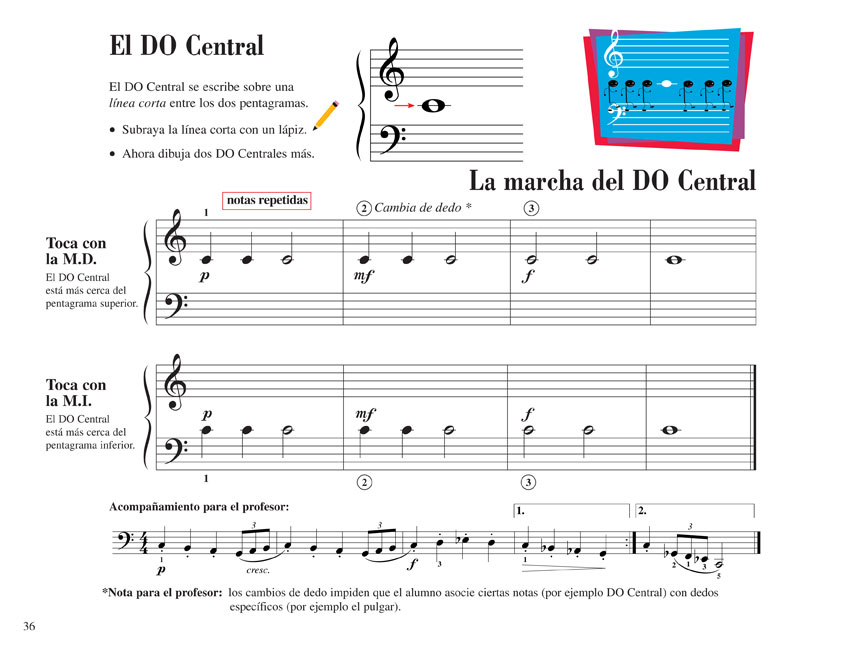 The Level 1 Technique & Performance Book introduces arm weight as Technique Secret 4, using an exercise called Gorilla Arms. The student experiences the feeling of heavy arms by imagining them as heavy gorilla arms. The release of heavy arms into the lap gives the sense of dead weight.

The ability to release the weight of the arm into the keyboard is essential. Failure to use arm weight in piano playing places excessive burden on the fingers. Instead of over-taxing the finger muscles and tendons (with the risk of inuring physical problems like tendinitis), the pianist should use gravity efficiently to overcome the weight of the key. The weight of the arm can be dropped, thrust, tossed, balanced on the fingertips, and transferred finger to finger. This effective handling of arm weight forms the basis for good tone production and an effortless, virtuoso technique.

There is ample opportunity to apply the concept of arm weight in the Level 1 Lesson & Theory Book, beginning with the pre-reading pieces that traverse the range of the keyboard. In each of these, a brief pattern is initiated with a drop of arm weight, and is finished with a lift of the hand that initiates a new drop into the next octave. 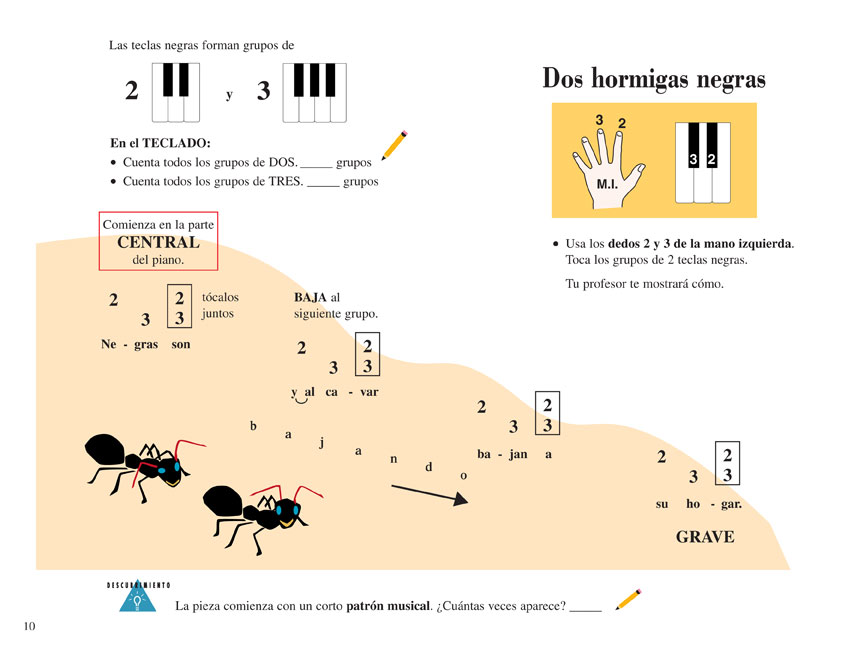 The Old Clock is played using a steady, rhythmic drop of arm weight into alternating arms: right-left right-left. This delivers a strong sense of pulse and puts the student in touch with the larger motions of piano playing. All the Stars Are Shining in the Technique & Performance Book explores arm weight applied to a grand gesture and the implications of arm weight for dynamic change.

The thumb can be a useful brace for a flattened fingertip. Placed behind the tip of an offending finger, just below the last knuckle, the bracing thumb rounds the hand and firms a potentially collapsing fingertip. The student’s first activity at the keyboard occurs in the Lesson Book with The Pecking Hen and The Pecking Rooster. Here the braced finger 3 is used to round the hand as the student explores pitch direction—pecking higher, then lower, up and down the keyboard. 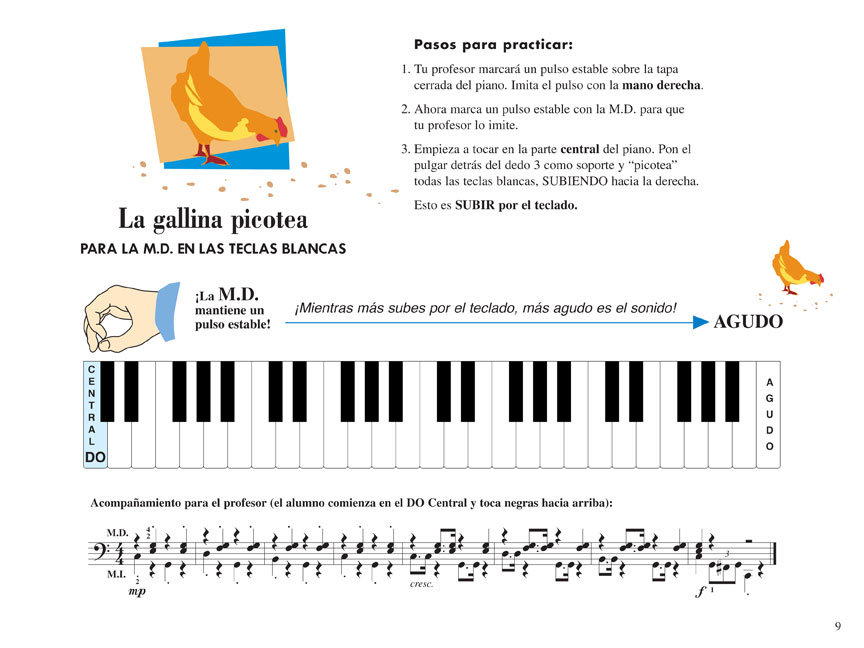 To understand this integration, we need to explore the concept of alignment. When the arm, hand, and playing finger are in a straight line, arm weight can flow directly into the fingertip. If the playing finger and forearm show an angle at the wrist, there is a misalignment which breaks the distribution of arm weight. The tall knuckle and rounded hand shape facilitate use of arm weight by preventing a collapsed knuckle and collapsed wrist. The finishing touch is to align a tall knuckle over the playing finger to provide a platform for balancing the arm.

If this sounds esoteric, don’t be dismayed. The braced fingertip and/or Making Glasses handle the issue of alignment beautifully. And it can be done on the keyboard—right when the problem occurs. If a fingertip collapses or the finger and arm appear out of alignment, ask the student to “Make Glasses” with the finger still on its key. Making Glasses not only curves the errant fingertip, but it brings the arm, wrist, hand, knuckle, and finger into alignment, restoring a balanced platform for arm weight.

“Right” from the Beginning

It takes effort and concentration for the student to recognize and associate a note with its corresponding key—but much less effort than having to erase learned finger-number associations. It also takes effort and concentration to help a student balance arm, wrist, and finger in coordinated fashion—but much less effort than having to undo years of practiced tension. The creative combination of pedagogical elements in Level 1 will help your students “get it right” the first time.